Homicide-suicide is defined by a homicide committed by someone who subsequently commits suicide. "Dyadic death" term has been also used for these deaths as these incidents often involve a pair of persons. Homicide-suicides usually involve a male perpetrator, who commits one or more homicides and then commits suicide. They generally occur within a family and may involve children. There is a love or spousal relationship between the victim and perpetrator in most cases. Three types of homicide-suicides have been classified; familial, spousal/consortial, and extrafamilial types. They have different sub-classifications defined by age of individuals and relationship. Homicide-suicides in older couples were interpreted as dyadic deaths, dual suicide pacts, or homicide-suicides with altruistic motives which are attributed to the perpetrator.

We present a homicide-suicide of an older couple involving a complex suicide. A 77-year-old retired man, who lived with his 72-year-old wife, was described as hot tempered by his relatives. On the incident day, his wife reported to her neighbors that he was acting strangely, and she was worried. Later that evening, he killed his wife by hitting her on the head with an iron bar. He then killed himself by cutting his abdominal region and by hanging himself. A detailed death scene investigation and autopsies of the couple were performed.

Homicide-suicides are defined as events where a perpetrator kills one or more victims before taking their own life. "Dyadic death" term is also used for these incidents. Homicide-suicides usually involve a male perpetrator who commits homicide/s and then commits suicide. They normally occur within a family context. Children may be involved, but in most cases between the perpetrator and victim, there is a spousal or love relationship. The incidence of murder-suicide was found to be 0.2 to 0.3 per 100.000, in a review of the literature [1]. While the reported data show that homicide-suicide happens around the world, it also demonstrates the complications involved in prevention and the rarity of homicide-suicides.

Homicide-suicides are classified into three types, as spousal/consortial, familial, and extrafamilial types, with different sub-classifications defined by relationship and age of individuals involved [2]. Older couples' homicide-suicides were interpreted as dyadic deaths, dual suicide pacts, or homicide-suicides with altruistic motives attributed to the perpetrator.
In this case report, we present a homicide-suicide case involving an older couple and complex suicide.

A 77-year-old retired man, who lived with his 72-year-old wife, was described as hot tempered by his relatives. In addition, he had undergone a craniotomy operation to drain a subdural hematoma after a traffic accident two months previously. After this operation he had depressive symptoms.

On the incident day, his wife reported to her neighbors that he was acting strangely, and she was worried. Later that evening, he killed his wife by hitting on the head with an iron bar. He then killed himself by cutting his abdominal region and by hanging himself. A detailed death scene investigation and autopsies of the couple were performed.

At autopsy of the perpetrator; on the upper left quadrant of abdominal region there were multiple superficial incised wounds (Figure 5). There was a clothesline and a ligature mark on the neck (Figure 6). General asphyxia findings such as petechial hemorrhages, congestion and cyanosis were observed both at external and internal examinations. The death was due to mechanical asphyxia by hanging. 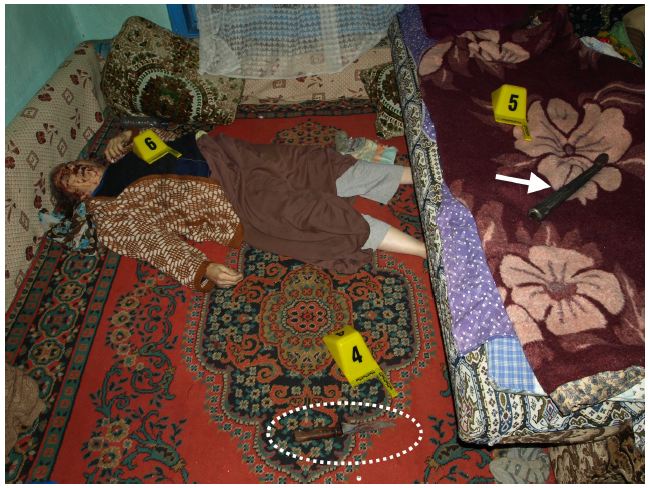 Figure 1: The homicide victim (72-year-old woman) is lying on the floor. There is a bloodstained knife on the carpet and an iron bar on the bed at the scene. 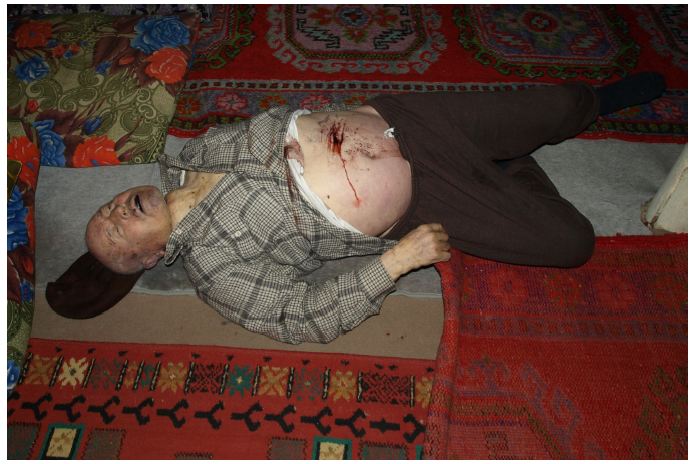 Figure 2: The perpetrator is lying on the floor as his relatives cut the hanging ligature. Incised wounds are observed at abdominal region. 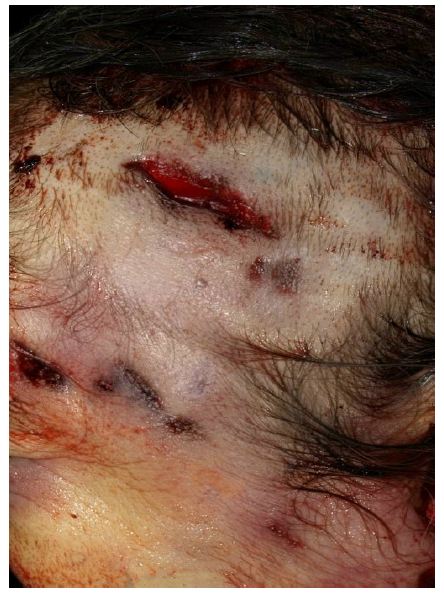 Figure 3: A 4 cm long laceration on left temporal region of the homicide victim. 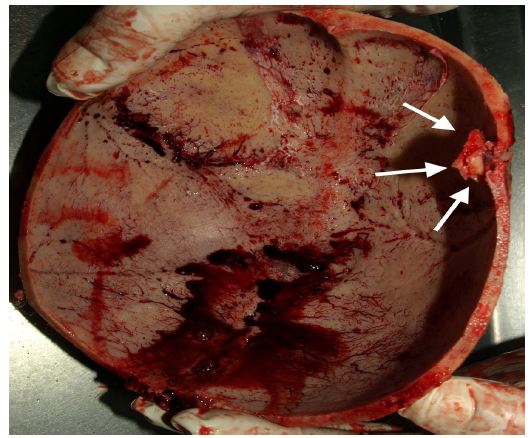 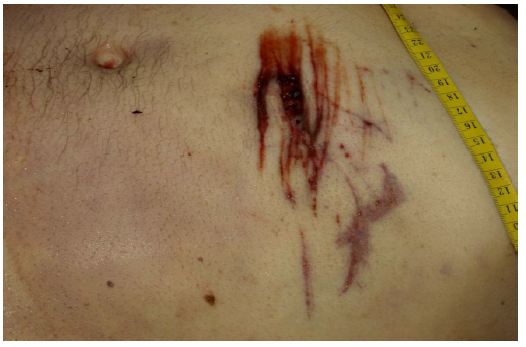 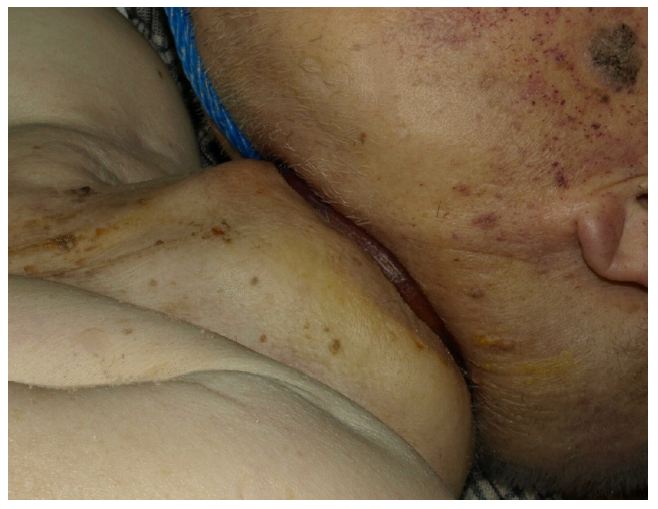 Figure 6: Clothesline and a ligature mark on the neck of the perpetrator
Discussion

Homicide-suicides are generally associated with the additive effects of many circumstances which lead to the emergence of homicidal-suicidal behavior. Schizophrenia, depression, and other mental disorders are implicated with homicide-suicides. They are also violent events with multiple cultural, environmental, health, and psychosocial antecedents [2–5]. In the presented case, male perpetrator had depressive symptoms after a craniotomy operation to drain a subdural hematoma.

In a study conducted in the same city (Konya, Turkey) which the case presented from, 10 homicide-suicides were determined out of total of 3940 death examinations and autopsies between 2000 and 2007. The victims' mean age was reported as 26 years (ranging from 2 to 50 years) and the mean age of the offenders was 32 years (ranging from 21 to 48 years) [6]. In the case presented, the perpetrator was 77-year-old and the victim was 72-year-old and they were significantly older than the homicide-suicide victims in this area.

Previous studies reported consistency of homicide-suicide rates in adult populations and this has been attributed to the constancy of depression and other psychiatric problems. Depression has been implicated in homicide-suicides committed by older men and those that involve couples [13–15]. Spouse caregivers will be at high risk of depression and other psychiatric disorders, as people continue to live longer, with the greater likelihood of frailty, comorbidity, and disability, including Alzheimer's disease and some related disorders [16].

In future research, the definition and types of homicide-suicide are important methodological considerations since homicide-suicides are sophisticated cases. It was reported that the homicide-suicide continuum, includes ideation, gestures, nonfatal attempts at homicide and/or suicide, and completed events at least for spousal/consortial events. It is likely that within each of these categories there are also variations and that antecedent variables are different, since these thoughts and behaviors are different from one another. For this reason, definitions of the dependent variable to include subtypes are required for accurate assessment and prediction of spousal/consortial homicidal-suicidal behaviors. For such rare events, this will be a methodological challenge [2].

The case presented in this paper is unique because it involves both homicide-suicide and complex suicide. A homicide-suicide case involving complex suicide which is defined as using more than one method to induce death has not been reported in the literature. The most frequently used suicide methods in Turkey are hanging, firearms and insecticide ingestion [17]. Before opting to use more lethal techniques by victims, methods of lesser lethality may be used. Pain, frustration, and anguish experienced by the suicidal individual are most likely associated with the conversion from lesser methods of lethality to greater ones [18]. As first suicide method, flexor surface of elbow and/or wrist cutting method was chosen in a study about complex suicides, as this method both gives pain and acute ache and takes too much time, second method was applied. In other words, the more lethal and second method was chosen by the victim due to pain, ache, and taking too much time [17]. The homicide-suicide perpetrator in the presented case has chosen incised wounds on the abdominal region, but he preferred hanging as the more lethal and second method.

It is concluded that similar cases which will be presented in the literature will contribute to assessment of homicide-suicide and complex suicide entities.